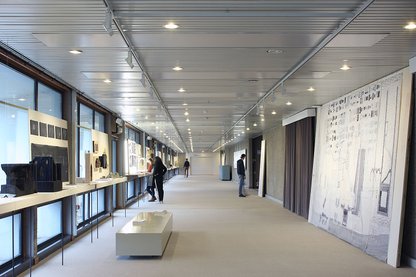 PROJECTIONS 3 / EXHIBITION AND DEBATE THE PROVOCATION OF THE SEEMINGLY IMPOSSIBLE

In their ‘Projections’ series, the Flemish Architecture Institute and deSingel provide a platform for existing research-by-design in Flanders. The guideline for the choice of projects lies in social topics and/or in questioning the role of the architectural discipline in society. The one single constant is the relevance of the research to Flanders.

The exhibition ‘The provocation of the seemingly impossible’ is based on two comparable design briefs. It starts out from the PhD research by the architect Jo Van Den Berghe and the artist Mira Sanders. They share a fascination with drawing and making things as generators of new insights and knowledge.

The first design brief deals with the addition of a gothic tower to the series of towers in the painting of ‘The Mystic Lamb’ by the Van Eyck brothers (1432). The second exercise is based on an analysis of and a proposal for the 12th-century abbey site at Villers-la-Ville (Walloon Brabant, Belgium). While this provocative project questions the potential and the materialisation of the transition from life to death, it comes into conflict with the censorship imposed on architectural interventions in consecrated spaces. And it also comes up against the limits of making and drawing, which are essential actions in the pursuit of architecture. This is a renewed insight into the status of the architectural drawing as an autonomous work.