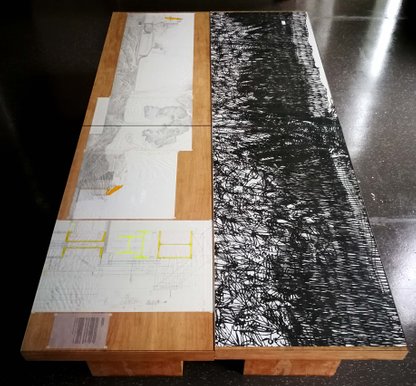 An artistic perspective at the symposium Arbeid en Democratie,

Through the work Tormented Gardens, Mira Sanders (Brussels, 1973) and Jo Van Den Berghe (Ghent, 1961) want to give insights into their own ways of worldmaking, and to invite the onlooker to critically question his/her own way of worldmaking, and his/her place in the world.

Tormented Gardens has started from this fascination of Alevtina Kakhidze with her own garden through her artistic work. Starting from Alevtina’s fascination, Mira Sanders and Jo Van Den Berghe have begun to make drawings in and of their own gardens, respectively in and around Trouesnel (Bretagne, France) and Sint-Lievens-Esse (Belgium). Biopsies of leaves, branches and roots permit them to make meaning through the nature of the labour they have chosen to do, and to more closely observe the deeper layers of their place for being in the world.

Mira Sanders and Jo Van Den Berghe have made these works as an act of resistance that comes forth from a deeply felt sense of urgency: with their idiosyncratic creations of meaningful worlds they want to resist the world that is imposed upon us, and that is often characterized by an ever increasing speeding and a lack of depth that is supposed to be taken for granted, as ‘fancy’, but that they want to fiercely abdicate from.

“We are in a constant dialogue and interaction with the environment, to the degree that it is impossible to detach the image of the Self from its spatial and situational existence. “I am the space, where I am,” as the poet Noel Arnaud has established” (Juhani Pallasmaa 2006). Tormented Gardens is a quest for a personal ‘centre’, embodied through a process of drawing that is much more based on ‘slowing’ than on ‘speeding’. It is Mira and Jo’s raison d’être, it is the meaning of their daily labour. It is the reduction to the essence of drawing: a pen, a pencil and paper. It is the claiming of their artistic and intellectual autonomy, freed from dependencies on prefabricated ways of thinking and acting. It is the proclamation of a loud and firm “NO” to the concept of imposed and often meaningless labour that the world seems to suffer from. It is an artistic disobedience to the omnipresence of ‘deadline’ in ‘the system’. It is a longing for the ‘maybe’, trying to grasp it in a drawing in order to share it with the world, in order to inspire.

In the context of the themes of this event Mira Sanders and Jo Van Den Berghe have decided to translate this sense of urgency they share into frenetic and utterly obsessive ways of drawing.

A manifesto for the sake of self-empowerment.

An invitation to you all.